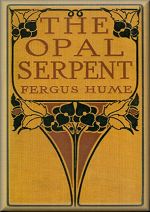 After falling out with his boorish country gentleman father, Paul Beecot ups and goes to London to make his way as a writer. There he rents a Bloomsbury garret and while not setting the literary world ablaze manages to get along although only just this side of falling into debt. Then he finds himself caught up in evil events.

It all starts when one afternoon he happens to meet his old public schoolmate Grexon Hay in Oxford Street. Hay is turned out like the proverbial dog's dinner but condescends to share Paul's supper of plump sausages. During their conversation over the bangers, Paul talks about his beloved, Sylvia Norman, whose father Aaron runs a second-hand book shop with a bit of pawnbroking on the side, or rather in the cellar. Alas, Paul and Sylvia cannot marry until he can support a wife and they have said nothing to her father for fear he will forbid Paul to visit.

Apparently Aaron Norman has "the manner of a frightened rabbit" and seems to be always looking over his shoulder with his one good eye. Obviously something fishy is going on there, but what?

Even stranger, when he sees the titular opal, diamond, and gold brooch, Aaron faints. Shown the brooch during their dinner, Hay makes an offer for it, but Paul refuses because it is his mother's and he prefers to pawn it so he can hopefully redeem it in due course.

We now meet the memorable Deborah Junk, servant of the Norman household and devoted to Sylvia. By far the most colourful person in the novel, her unique style of conversation would not disgrace a working class character created by Dickens, and when she is on-stage she dominates the scene.

But there's plenty going on when she's engaged elsewhere. Why did Aaron Norman faint when he saw the serpent brooch? Who is the man who warns Beecot against Hay, describing the latter as "a man on the market", and what does the curious phrase mean? Why did an Indian visitor to Aaron Norman's book emporium leave a pile of sugar on the counter? Does a truly ghastly guttersnipe born to hang know more than he lets on?

My verdict: The Opal Serpent contains some surprisingly strong content, such as certain comments made by the murderer, which would be disturbing even in this day and age, while the method used to kill the victim in full view of others is so awful I was surprised to find it in a novel of this vintage. Plus the use to which the brooch is put is equally grim.

This novel trots along at a steady pace with as many twists and turns as a serpent as it slithers its way to a rip-roaring denouement, and I must say the plot certainly underlines the traditional belief opals are unlucky! Recommended. 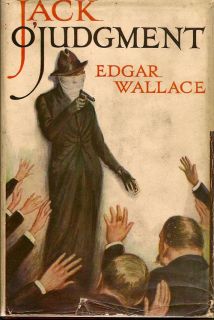 The novel opens on a snowy night with the murder of drug addict "Snow" Gregory, found with a jack of clubs in his pocket. Some whisper he could tell a lot about the wealthy and exceedingly shady businessman Colonel Dan Boundary, a classic example of an honourable title assumed by a dishonourable man. Now of course Gregory is silent forever.

The colonel subsequently receives several jacks of clubs from an anonymous source, and not being one to hesitate when his life is in danger, goes to see Stafford King of the CID. You might say he knows King by way of business in that the investigator has spent the past three years trying to smash Boundary's gang of associates, an unsavoury bunch but as yet unprosecuted. For while Boundary's business acquisitions are on the surface above board, the method by which they were obtained is not, but the problem is proving it. The irony of this visit is not lost on King.

Next we meet the odious Pinto Silva, a stage door johny enamoured of theatrical artiste Maisie White, who dislikes him intensely. Silva belongs to Boundary's bunch, and other members include Maisie's father Solomon White. Solly now wants to break away from them. Will he literally turn King's evidence and blow the whistle on the criminal syndicate?

Another gang member, er, associate is Lollie Marsh, a femme fatale whom Boundary has set to follow King. She discovers King is spending a lot of time with Maisie. Meantime, Boundary tries to blackmail the girl into agreeing to tie the knot with Pinto -- he's already married but says he will get a divorce, the cur -- by threatening if she refuses her father will be framed for forgery.

But then Boundary is arrested and brought to trial for blackmail and conspiracy.

Meantime, the mysterious Jack o' Judgment whose calling card is the jack of clubs keeps popping up, a strange, almost supernatural, shrill-voiced figure disguised in a long black silk coat, slouch hat, and a face concealed by a white silk hanky. Jack makes it his business to stick spokes in Boundary and company's various wheels and does it extraordinarily well. Indeed his machinations are so troubling Boundary offers a hundred thousand pounds to anyone who can rid him of that pestilent Jack.

The mystery here is two-fold. Who is Jack and will he succeed in bringing to justice all the members of Boundary's gang? And just as importantly what is his motive?

My verdict: The answers to these conundrums certainly caught me by surprise. Boundary and company are particularly nasty villains, not above kidnapping and murder, and readers will likely cheer Jack on despite his illegal activities as they are carried along at the gallop to a satisfying conclusion. 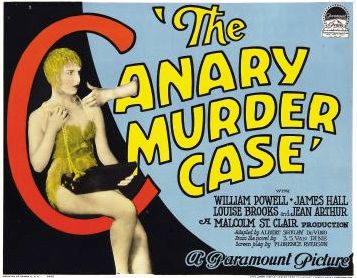 Broadway beauty Margaret Odell, dubbed The Canary after her rise to fame playing that yellow avian at the Follies, is found murdered in her flat. The only way to enter or exit her building after 6 pm, when the side door is bolted, is through the front entrance, clearly visible from a telephone switchboard manned 24 hours a day. The side door is still bolted when Miss Odell is discovered strangled, her flat ransacked, and valuable jewelry missing. Yet nobody was seen entering or leaving her home during the relevant period.

Miss Odell has kept company with a number of admirers at one time or another and their ranks provide the suspects: socialite Charles Cleaver, wealthy manufacturer Kenneth Spotswoode, fur importer Louis Mannix, and neurologist Dr Lindquist, not to mention professional burglar Tony Skeel. Philo Vance investigates to the babble of his usual erudite running commentary, seeking answers to such questions as how did the murderer get into Miss Odell's flat without being observed? What was the motive? Could more than one person be involved?

My verdict: The novels in this series always require some suspension of belief, what with Vance and his biographer/narrator Van Dine traipsing around crime scenes with the connivance of DA Markham, in this entry to the extent of lying about in Miss Odell's flat smoking themselves silly. Then there's the question of Vance being permitted to participate in police interviews. But if you lock your disbelief in the cupboard the story rattles along quite well, or at least until the closing stages wherein the identity of the murderer is deduced via a poker game in DA Markham's home, a daring stroke of plotting, I admit, but somehow it felt curiously flat. This is probably because I'm not a poker player so the lengthy explanation needed acted as a brake on the action for me. And how did the murderer get into the locked flat unseen? GAD fans will probably know the method from elsewhere but my gripe is Vance coneals the necessary information from Markham *and* the reader until very late in the game. So ultimately a bit of a disappointment for this reviewer at least. The Dragon Murder Case is kicked off when weekend house-guests on the Stamm estate decide to go for a nocturnal swim during torrid weather. All of them have been imbibing too much alcohol and when one of the men dives into Dragon Pool...he vanishes.

The estate itself is an oddity, being situated in a heavily wooded rocky area of Manhattan and yet more or less cut off from the busy city. Mine host is exotic fish fancier and semi alcoholic Rudolph Stamm. Also present is his sister Bernice, fiancee of Montague, the man who went missing. Then there is stockbroker and family financial advisor Alex Greeff, dissipated man about town Kirwin Tatum, widowed Mrs Teeny McAdam, who may have been a past flame of Montague's, Ruby Steele, an artiste much enamoured of dramatic gestures, and the level-headed Mr Leland, who lives in a cottage on the estate and is routinely insulted by certain guests for his Native American blood. Most of them have reason to wish Montague ill and none seem particularly upset about his death. In addition, Rudolph Stamm's ailing mother, given to oracular announcements and mentally unwell, lives under the care a nurse on the top floor of the mansion and tells the investigators rambling stories of the strange sights she has seen, such as the flying dragon who protects the family.

Once Philo Vance and company are called in, events unfold in sometimes startling fashion, most notably when Dragon Pool is drained. The operation discloses a trail made across its silt floor by l4" long feet, accompanied by prints from a three-clawed beast. Could the latter be the dragon of local and family legends?

My verdict: It's always fun trying to work out how a seemingly impossible crime is carried out. My theory on how a body could be removed from the pool without other guests noticing was nothing like the solution advanced by Vance -- and mine was (of course) wrong. Bizarre as it is, Vance's explanation is workable in the scene as given, even though it must be one of the most outrageous methods to remove a corpse without being discovered in the act ever utilised in a mystery. An aside: readers will learn Vance bred exotic fish as well as Scotties. Is there nothing Vance can't undertake?