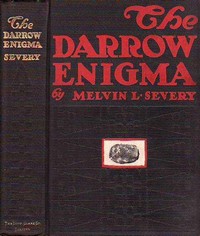 The Darrow Enigma is narrated by an unnamed doctor, consulted by chemist and lawyer George Maitland for a bit of a nerve tonic. They become friends, for the narrator is greatly interested in the science, and it is through this friendship that our anonymous physician becomes involved in the case.

Ultimately Maitland confesses the real reason he visited the medical man is because he is the Darrow family's physician and has fallen for Gwen, daughter of the house, and wishes to be introduced. Needless to say Gwen is beautiful even though, whisper it quietly, she does not imprison herself in corsetry. Well, then, an introduction to the young lady is effected and it is while the two friends are visiting the Darrow household and Gwen is appropriately singing In The Gloaming as dusk falls when her father John clutches his throat, cries out he has been murdered, and dies.

Yet there is nobody in the room other than the Darrows, Maitland and the doctor, and two other visitors. How then was it done? The doors into the room were closed or locked, the only open window was perhaps six inches ajar and locked in that position and John Darrow was sitting in a high-backed chair over eight feet from it in any case, plus there were no niches or cupboards or curtains behind which the unseen assassin could hide. Or was it suicide? Either way what was the weapon and where has it gone? To find out the police bring in three investigators: Mr. Osborne, Mr. Allen, and French-born Louis Godin, now reportedly the best detective in the U.S.

And so begins a tale with a dab of woo woo and a touch of gothic. John Darrow had had dreams foretelling he would be murdered, as a result of which Gwen makes him a certain promise that will later cause romantic havoc. It is established there's a connection to India long ago -- though it is nothing to do with gems stolen from Indian temples -- and Maitland steams off to pursue investigations there. After that he is off to San Francisco to find and interview a couple of Darrow's former servants, who are Chinese and so, we might say, automatically suspect.

There follows a series of Strange Coincidences involving Anthony and Cleopatra, leading to what can only be described as a brilliant piece of deductive reasoning (involving reading detective novels!) that puts them on the track of certain parties of interest. The culprit is brought to trial but is it the right person? Was the murder committed by the bizarre method the man on trial describes? What about the motive?

My verdict: First, the method employed is one that fits a clue hidden in the text, though I must say that more clues are needed so the reader can deduce the culprit. There are red herrings and side trips and everything seems to fit together very well until the final confrontation in the court room when the entire case is turned upside down. Thus The Darrow Enigma is a bit of a mixture, though unlike the proverbial curate's egg on balance I would give it a nod rather than a frown since, despite the weakness mentioned, I found this novel enjoyable enough and the weapon utilised so outrageous and yet simple that points must be awarded on that alone!

In an aside, I was intrigued by Severy's description of the eavesdropping device employed at an important point and consulted an electrical engineer about it. He said theoretically it was possible but the technology was not up to it at the time. However, invention of this gizmo is not surprising as Severy held at least 90 patents. His fictional bugging device involves a piece of burnished silver fastened to a diaphram, a small beam of light trained on the silver being reflected onto a sensitised moving tape photographically registering movement of the diaphram for later conversion to an ordinary record, and needless to say the result is a vital piece of evidence.

On a sleety December night taxi-driver Spike Walters picks up a fare at Union Station. The well-dressed, veiled woman instructs Walters to drive to a poorer part of town but when he arrives at the address given she has vanished from his cab, leaving her suitcase -- and a man's body. Of the missing woman Spike asks himself, as will the reader, "Where was she? How had she managed to leave the taxicab? When had the man, who now lay sprawled in the cab, entered it?"

Chief of Police Eric Leverage and amateur criminologist David Carroll cooperate in solving the crime. The departed is identified as club man Roland Warren, a cad rumoured to have been involved with a number of socially prominent married women although there has been no open scandal, and just as well being as he is engaged. It transpires every article in the suitcase belonged to him and this, along with certain other evidence, convinces the authorities and the public that Warren was planning to elope -- but not with his fiancee. Given the dead man's reputation of not being too fussy about whose wife he romances, a number of upper crust persons naturally come under suspicion, and then there's Warren's just discharged valet, not to mention the bereaved fiancee.

My verdict: Midnight features a fairly complex plot unreeled at a slower pace than in many works. Older novels of detection often display social mores that seem strange to modern eyes, for example not mentioning a woman's name at the club or the terrible consequences of cheating at cards or in some other way being touched by the rancid breath of scandal. David Carroll must navigate these treacherous waters to solve the mystery of the who and how and why of the crime. 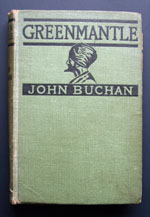 I've debated whether or not Greenmantle could be classified as a mystery. Set during World War One, it certainly revolves around one: who is Greenmantle and can he be found in time to interfere with German plans to use him in their bid to grab the middle east?

Richard Hannay, last seen just before the war in The 39 Steps and now a major in the Lennox Highlanders, is recuperating from shrapnel wounds suffered at Loos, as is his friend Sandy Arbuthnot. Anxious to return to the front line, they are instead asked to undertake a secret mission.

Hannay, Arbuthnot, and the "sedentary dyspeptic" American John S. Blenkiron, joined later by an old friend from Hannay's South African days, must find the mysterious Greenmantle and assess the situation so the British can take countermeasures. It is a matter of great urgency and no time can be lost. However, they must begin the task with no clues except three words scribbled on a piece of paper -- Kasredin, cancer, and v.I. In different disguises the men take separate roads to Constantinople where they will meet and begin their search, if they all arrive safely -- and it's a big if. Along the way they encounter dangerous enemies and life-threatening situations and must use fast thinking and physical daring to even get to Turkey to begin their quest in the first place.

My verdict: This novel mirrors a time and society where fair play, decency, and honour were important and practiced as far as possible even in wartime. Military and intelligence gathering methods have changed since that war and for the modern reader this gives Greenmantle a poignant air at times. Even so, it's a rattling good yarn, with plenty of action, excitement, and suspense, along with a dash of wit. Although I'd read the novel before, I still laughed out loud at the mental picture of Hannay in jammies and dressing gown when, due to circumstances, he is "left to receive my guest in a room littered with broken glass and a senseless man in the cupboard". As is usual with Wallace's works, The Secret House gallops off to a cracking good start with a fellow being interviewed for a job as assistant to the editor of a scandal rag called The Gossip's Corner -- an editor whose face is concealed during the interview by a bag-like fine silk veil tied under his chin. That would give most people pause, but the applicant takes it in his stride and gets the job.

Not long afterwards a millionaire named Farrington overhears two men arguing virtually on his doorstep about turning in the notorious blackmailer Montague Fallock, a man of whom there is no known photograph. Suddenly two shots ring out and both men lie dead.

Naturally when the police arrive Farrington's house is searched. Assistant commissioner T. B. Smith of Scotland Yard (who happens to live in the same London square) discovers the millionaire's area door is ajar. Not only that but he also picks up a gold scent bottle with the same perfume he detected in Farrington's hall although it is not that used by Doris Gray, Farrington's niece and ward. The only other clue is a silver locket engraved with a couple of lines whose meaning is unfathomable, discovered on one of the dead men.

Among other characters, the reader meets Frank Doughton, who loves Doris, adventurer Count Paltavo, Doughton's rival for her affections, Lady Constance Dex, friend to Farrington and Doris, and Dr Fall, physician to Mr Jim Moole. Mr Moole is the never seen eccentric owner of The Secret House in the village of Great Bradley, and many are the stories told about him.

My verdict: The plot is a rich stew of sinister foreigners, fraud, murder, the search for a missing heir, a most peculiar will left by a suicide, disappearances, rooms that change in the twinkling of the proverbial eye, revenge, and much more besides. While some elements are far- fetched, still it's one of those yarns carrying the reader along at a breakneck pace until an unusual denouement putting Smith in danger of...well, better not say, but as a hint alert the reader to consider the estate on which stands The Secret House.