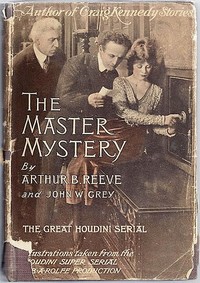 I may be the last one to have seen this gem but I must say I really enjoyed The Master Mystery, stated to have been "Novelized by ARTHUR B. REEVE and JOHN W. GREY From Scenarios by Arthur B. Reeve in Collaboration with John W. Grey and C.A. Logue". Gutenberg offers an etext but the better version is their "Profusely Illustrated with Photographic Reproductions Taken from the Houdini Super-Serial of the Same Name" with stills showing various scenes, notably the murderous (but oddly mild looking) Automaton and shots of Harry Houdini as the hero of the multipart silent serial.

The writing is telegraphic and not reminiscent of Reeve's usual style, although it is done ably enough so pictures unfolding on the mental screen can be enjoyed quite well. And the plot! Our hero spends much of his time experiencing various perils -- suspended head down over a vat of acid, locked in a box and left to drown, chained and thrown into a river, hung up by his thumbs, fighting in a diving suit, falling through trapdoors, attached to a garotting machine, tied up in barbed wire, and so on, which added to secret hideouts in the cliffs, horrid dens in Chinatown, candles that provoke the Madagascar madness by which victims laugh themselves to death or insanity, and much more must have made positively thrilling viewing! 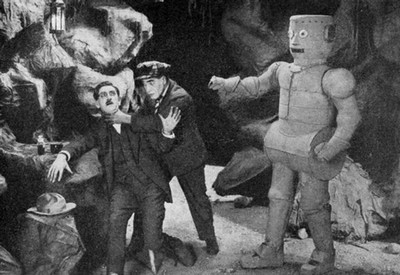