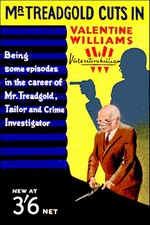 MR TREADGOLD CUTS IN is a fitting name for a collection of short stories, by Valentine Williams, relating various investigations carried out by elderly tailor Horace Bowl Treadgold of Messrs. Bowl, Treadgold & Flack in London's Savile Row. Founded during the reign of George III, the firm's proud boast is one of its principals measured the Prince Consort for a pair of nankeen pantaloons. Treadgold's favourite leisure pursuits are stamp collecting and the study of crime and this collection -- related by George Duckett, the firm's legal adviser -- showcases Treadgold's amateur investigative skill as well as his knowledge of Tristram Shandy, from which he quotes at the drop of a hat.

Duckett happens to be visiting when Major Cobbey arrives to consult Treadgold. It seems the major runs the Cleremount Abbey Estate in Surrey, once the estate of the Earls of Cleremont and now the site of upscale bungalows and an eighteen-hole golf course. Recently three women have been attacked on the estate but fortunately escaped their assaulter. Treadgold agrees to visit and look into the matter but a couple of days later the major rings up to announce a young woman who lived on the edge of the estate has been stabbed to death. The culprit was glimpsed but just who is THE RED-BEARDED KILLER and what is his motive?

One evening Duckett is invited round to Treadgold's rooms, where he finds a young American, Olivia Rawle. Her now deceased father was a client of the New York branch of Bowl, Treadgold & Flack, but she now lives in Somerset with her ailing grandfather Colonel Charton. Olivia is there to consult Threadgold on a strange matter. When her uncle informed her her grandfather had been immobilised by a stroke she returns to be with the old man, but it is the uncle who dies six weeks later. Her grandfather's male nurse and housekeeper both claim they heard the noise of THE SINGING KETTLE the night he died, but she does not believe it until she too hears the same thing. The solution to the strange affair reveals particularly dark doings in the family abode.

Professor Webber possesses one of the best private collections of Egyptian antiquities in the country. He arrives to privately consult Treadgold about the theft of THE BLUE USHABTI, a glass representation of the hippo-headed god and an artefact said to have been the amulet of a great queen. It has been replaced by a replica and, embarrassing to relate, it appears the deed was done by one of his guests at a recent dinner party. Thus the professor is reluctant to bring the matter to the attention of what he terms the more regular authorities. Threadgold and Duckett begin their investigation...then the ushbati reappears. The person involved and the reason for the theft is unexpected, although subtly clued for the alert reader.

Inspector Manderton consults Threadgold on a case involving a rich man's double life. The coroner's jury's verdict was married stockbroker Dudley Frohawk was murdered by his lover Leila Trent, who subsequently committed suicide. The press christened the affair THE DOT-AND-CARRY CASE after the name of the roadhouse where the couple were found dead. The girl did not have a good character, having been involved with Paul Morosini who ran with the dope peddling crowd in France. Despite how it all looks Mrs Frohawk is convinced her husband had not strayed, so this time Threadgold's assistance serves two purposes: to establish the truth about the deaths and to confirm Mrs Frohawk's faith in her husband was warranted.

Manderton calls in Threadgold in his capacity as tailoring expert in connection with the suicide of a man found on the permanent way of the Great Western Railway. Although his face is mangled beyond recognition, papers on his body identify him as Axel Roth. Other items he carried include an envelope containing a scrap of black cloth shaped like a letter and a notebook with a page listing six colours and one or two other words. In this complicated affair which Duckett dubbed THE CASE OF THE BLACK "F" (which, to my delight, features a cameo by Major Francis Okewood of the Secret Service) there is much to be unravelled.

Duckett happens to be at his club when Sir Hector Foye appears and tells him one of his tenants, a close friend of his wife, has gone missing. Thus is the reader introduced to THE STRANGE DISAPPEARANCE OF MISS EDITH MARLESS. Miss Marless had been living in the West Lodge on the Foyle estate and on a couple of occasions a young man was seen leaving or entering the lodge in the middle of the night. Has the missing woman eloped with him or is there a more sinister reason for her absence? Sir Hector also suspects she was blackmailing his wife but what hold could Edith possibly have had over her?

Threadgold and Duckett are spending a couple of days in Paris after a Mediterranean cruise. Jack Danesworth, an American lawyer practicising in France, visits to ask Threadgold for help in finding a princess who has disappeared. She was in France to claim an inheritance, including a ring in which DONNA LAURA'S DIAMOND is set. It comes with a curse: whoever wears it will die by beheading. Threadgold consults the Club St. Pierre, whose members are the head porters of leading hotels in England and on the continent, and thus a clearing-house for confidential information about hotel guests. Their participation provides leads to those responsible for the kidnapping.

Manderton is investigating THE MURDER OF BLANCHE MEDLOE, found dead in a somewhat disreputable block of flats. She arrived the night before with a male companion, now nowhere to be found but who may have been Bruno Aldinia, an Italian adventurer with whom she had recently been seen around town. Threadgold is called in to assist Manderton by again providing an expert analysis, this time of the man's dress clothes left behind in a crocodile dressing case. Or was it a pigskin kit-bag as Mrs. Argyle, manageress of the flats, insists? They have another clue to the culprit's identity: the sleeve (cuff) link found in the dead woman's hand.

The housekeeper at Acacia Lodge finds her scholarly employer Dr Alexander Reval dead of head injuries in his study. Money is missing from his wall safe. Christopher Kendrick, whom Duckett has known since he was a schoolboy, is arrested for murder and robbery, much to the distress of Tatiana O'Rorke, assistant to Dr Reval. The old story of the amorous employer had reared its head, leading to a violent scene in which Kit was heard threatening him. But was the culprit THE MAN WITH THE TWO LEFT FEET (a Holmesian title if ever I saw one!)? The effort to find him leads to an unusual advertisement in the agony column in the Times and justice dispensed in a non judicial way.

Duckett is in America for business reasons and he and Threadgold attend a house party on Long Island Sound. The story opens with their hosts and other guests listening to the Roden Radio Hour. Duckett had procured an invite for Threadgold, who wishes to meet Marcia Murray, singer on the show who will join the party after the broadcast. The atmosphere at the house is tense, with quarrels and sniping between various characters. It is regrettable but not surprising in the circumstances that HOMICIDE AT NORHASSET follows and there is a rich field of suspects when Marcia is strangled in her nearby bungalow.