Review: Tales of Terror and Mystery by Arthur Conan Doyle 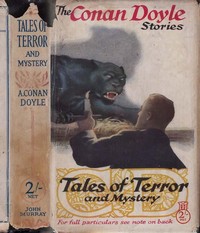 Some time ago I noticed Conan Doyle published more than one collection of short stories involving protagonists other than his most famous creations. I am reading them as I find them and now here are a few comments about the mystery section of his anthology Tales of Terror and Mystery.

Monsieur Louis Caratal and his companion, newly arrived in Liverpool from central America, must get to Paris without delay. Thus Caratal charters a special train to London at a cost of some fifty pounds, a significant sum pointing to the urgency of their journey. However, the train becomes The Lost Special somewhere between St Helens and Manchester, the only trace of its passage being the body of its driver at the bottom of an embankment. It is not until some time later that the truth comes out and even then it's as the result of a confession rather than the investigation.

Narrator Doctor Hamilton recalls when, newly qualified, he was reluctant to go into medical practice (a strange confession after all those years of training!) and thus is attracted by an advertisement seeking the services of a strong and resolute medical man who must also be an entomologist, preferably a coleopterist. As it happens, beetles are a particular interest of his and he successfully applies for the post. The advertisement was posted by a titled family and its object is to avoid a family scandal involving the poster's brother-in-law, he who is The Beetle-Hunter.

In The Man With The Watches the titular corpse is found shot to death an hour into the London- Manchester rail journey. A couple who entered the compartment in which the body is found have disappeared and so has a man from the next compartment, yet no passengers were seen to leave or join the train at the one stop made before the grisly discovery. Where are the missing trio of travellers and why is the dead man in possession of no less than six gold timepieces?

Narrator Mr Colmore arrives at Thorpe Place, near Evesham, to take up the post of tutor to Sir John Bollamore's two sons, aged eight and ten. Sir John is a solitary, withdrawn widower and the household leads a quiet life. One day the younger boy, Master Percy, falls into the mill-race but is rescued by Colmore, who is then summoned to Sir John's study to describe the incident. He therefore enters a room in which nobody other than his employer and an aged servant who cleans it have set foot in three years. It is here Colmore sees The Japanned Box, which Sir John keeps by him at all times. Then one evening he hears a woman talking in the study. Who is she?

The village of Bishop's Crossing is home to much-loved Doctor Aloysius Lana, whose olive skin led to his nickname of The Black Doctor. Dr Lana receives a letter from Argentina and breaks off his engagement to Miss Morton, whose enraged brother Andrew declares the doctor deserves a good thrashing. One night Dr Lana's housekeeper meets Andrew -- who is carrying a hunting crop -- at the gate of the doctor's garden. Dr Lana is discovered dead next morning and the evidence points to Andrew being the guilty party. But was he?

Archeologist Ward Mortimer is appointed curator of the Belmore Street Museum following the unexpected resignation of Professor Andreas. The greatest treasure in the museum is The Jew's Breastplate, a gold artefact decorated with a number of valuable gems. Soon there are two burglaries, both of which focus on the breastplate. How is the miscreant getting into the well secured and guarded museum? And why doesn't the culprit just pinch the breastplate and be done with it?

My verdict: An uneven collection, but I spent an interesting hour or two reading it. Most readers will guess the solutions but one or two twists along the way may be more difficult to rumble and I found it a refreshing change from Holmes and company.

Etext: Tales of Terror and Mystery by Arthur Conan Doyle 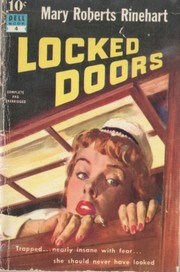 After less than a week Nurse Bosworth, employed to care for the two young sons of Mr and Mrs Francis M. Reed, becomes so nervous she leaves their employ. She believes a crime has been committed in the Reed's house in Beauregard Square. It's certainly an odd household -- she and the children are locked in at night, all the servants have been dismissed, the phone wires are cut, and the boys' parents are extremely jumpy and look positively ghastly.

Enter Nurse Hilda Adams, who occasionally assists the police with information discovered via her professional role. Sent by Detective Patton to replace her colleague, she finds the house to be just as described and so starts her investigation on what is going on. This comes to cover such conundrums as the "basement ghost" seen in houses in the square, where and why the boys' dog disappeared, and explanations for various strange events at night.

Eventually she solves these and associated matters such as the reason the boys' mother sleeps in a cot at the head of the stairs, why all the carpets and most of the furniture has been removed, and what forces the Reeds to keep their lights blazing all night.

My verdict: The clever unexpected solution to this multitude of mysteries explains all the strange events, yet it would likely not occur to most readers. There is a sort-of clue early on that might put them on the track to guessing what is taking place in the house, but I should have liked one or two more obvious pointers. The closing revelations certainly surprised me! More I shall not say about this tightly written and genuinely suspenseful novella for fear of revealing too much.