Jane Finnis on Why She Loves Short Stories 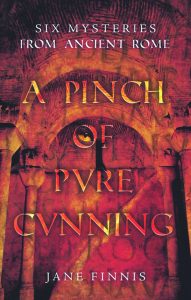 Intro from Mary and Eric: We first met Jane when we both had stories included in Mike Ashley's Mammoth Book of Roman Whodunits, before the first of Jane's Aurelia Marcella novels was published. Ever since that fateful meeting, she has been writing short stories for other peoples' anthologies and has finally published a collection of her own. "I have a specially soft spot for shorter mysteries", she declares, and in this blog she explains why...

One of the most prestigious annual writing competitions has just opened up for submissions for 2021: the Margery Allingham Short Mystery Competition. This is brilliant news for short-fiction writers everywhere; you may be published or not, but as long as your entry is unpublished you can enter it online. The winner gets £500, plus two passes to the 2021 CrimeFest book convention which (fingers crossed) will be in Bristol, UK, next June. If all this makes your little grey cells tingle and your keyboard fingers itch, full details are at https://thecwa.co.uk/debuts/short-story-competition.

Meanwhile, ignore those merchants of doom who regularly predict the demise of the short story. They’re wrong. In books, in magazines, on the Internet, mystery and crime stories of all lengths remain popular, and after all, the basic ingredients are the same whatever the word count. Margery Allingham gave a succinct definition of what those ingredients are, which is quoted each year among the guidelines for the competition she inspired:

“The Mystery remains box-shaped, at once a prison and a refuge. Its four walls are, roughly, a Crime, a Mystery, an Enquiry and a Conclusion with an Element of Satisfaction in it.”

In other words, it’s the puzzle element of a traditional mystery that hooks you. Believable characters, authentic settings...yes, they’re important; but it’s the puzzle, the whodunit and whydunnit, that are crucial, and they are directly in the spotlight in a short story.

Take one of my favourites – one of everyone’s favourites - Sherlock Holmes. Conan Doyle was a master of plotting. Of course the people and places featured in each short story are nicely sketched in with just a few telling details, but It’s the “what-happens-next” factor that’s important. Conan Doyle is superbly economical as he tells the tales. One of the classic examples of this happens in “Silver Blaze”, about a valuable racehorse abducted from its stable at dead of night. Holmes questions everyone at the racing stables, checks motives, formulates theories, and finally points the police inspector (and perhaps the alert reader) to the clinching detail by drawing attention to “the curious incident of the dog in the night-time.” This evokes the reply, “The dog did nothing in the night-time.” “That was the curious incident,” says Holmes. And “brilliant,” say I!

For me, the best thing about writing short stories is that I can let my imagination fly free, more freely than with a longer project because the time and research needed aren’t so overwhelming. A good story is like the fabled magic carpet; it can whisk you away to another reality, a distant place or time. My new anthology contains Roman-era tales, some featuring the innkeeper-sleuth from my novels, but I can steer my magic carpet wherever I fancy. For instance modern tales I’ve had published involve the shady business world of present-day London, and family secrets revealed in a peaceful (?) English country garden.

In my pipeline right now are, besides more Romans, a Cold War spy, and a murderer among settlers in a future colony on Mars. When and where they’ll see the light of day I don’t know yet. In an anthology or a magazine? Or one of them might be my next entry for the Margery Allingham 2021 competition...